Over 60 international experts gathered in Doha today to begin the first technical meeting to follow-up on the historic recommendations and commitments made in the Declaration of Berlin on the manipulation of sports competitions.

Organised by the United Nations Educational, Scientific and Cultural Organization (UNESCO) and the International Centre for Sport Security (ICSS), the meeting has gathered government officials, international experts and leaders in sport to follow-up on the commitments outlined in the Declaration of Berlin to tackle the manipulation of sports competitions. 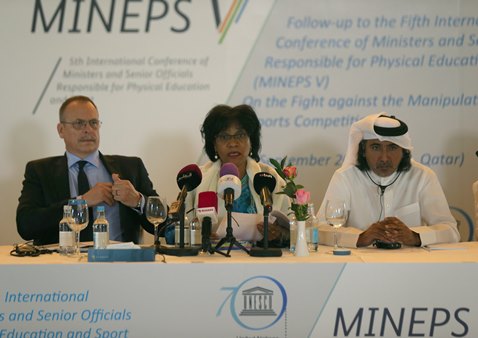 “Adopted in 2013 by the 5th World Conference of Sport Ministers (MINEPS V), the Declaration of Berlin marks a decisive milestone in strengthening cooperation between governments and sports federations because it is the first international declaration on the fight against manipulation of sports competitions.

“UNESCO wishes to reaffirm that the strengthening of cooperation between governments, regulatory authorities and sports federations will be key to the success of our future actions.

“This meeting hopes to bring about concrete actions that could be implemented in the short and medium term to effectively fight against manipulation of sports competitions.”

“Four years ago, the ICSS started working on the subject of match-fixing and since then, we have been involved in many discussions and international projects, including work with Council of Europe, UNESCO, UNODC and the Sorbonne University, to tackle this issue.

“However, the Sport Movement alone cannot successfully prevent and fight the manipulation of sport competitions, particularly when corruption and transnational organized crime are involved.

“UNESCO’s 5th World Conference of Sport Ministers and the resulting MINEPS V Declaration of Berlin were as significant milestone for sport and we are gathered here for two days of intense intellectual discussions with 60 of the world’s leading experts.

“I want to thank UNESCO for trusting us with this meeting and for the cooperation initiated two years ago within the framework of the UNESCO-ICSS Joint Capacity Building Programme.”

“We now know a lot more about match-fixing than we did a few years ago, however what really has changed in the way we are tackling the issue?

“Trans-national organised crime is now a very real issue in sport and this meeting is about bringing together the highest calibre of experts from around the world to develop the tools to tackle match-fixing.”

“The Declaration of the Berlin shows that many countries around the world now want to move from policy intent to policy implementation. This expert meeting is an important stepping stone in helping Member States to implement policy and will provide valid contribution to MINEPS VI, which is due to organised no later than 2017.”