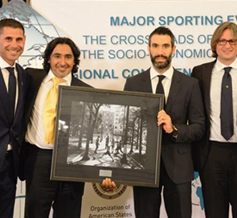 Spanish football greats Fernando Hierro and Fernando Sanz have been appointed Save the Dream Ambassadors at a ceremony in America this week. The retired Spanish footballers will join an elite group of sporting icons to help promote the positive values of sport to young people around the world.

The appointments were made during the Organisation of American States (OAS) and International Centre for Sport Security (ICSS) regional conference on Major Sporting Events in Washington, D.C. As Ambassadors, the pair will participate in activities to educate, promote and protect the core values and integrity of sport for young people.

”It is an amazing privilege to be chosen as one of the Ambassadors for Save the Dream. I am determined to do my best to support this cause wholeheartedly. I want to use the opportunity to promote the values of fair play and support the work of Save the Dream by engaging with youth to bring positive change to young lives through the power of sport. ”

Fernando Sanz started his career at Real Madrid before moving to MÃ¡laga Football Club where he spent seven years and earned more than 250 starts before retiring in 2006 to take up a role as the club’s President. He is currently Director General of La Liga de Futbol Professional (LFP) Middle East and North Africa and recently returned to the pitch for a one-off, star-studded Real Madrid ‘Legends’ match against Liverpool FC ‘Legends’ at BernabÃ©u Stadium in Madrid.

”I am pleased to be invited to join such a prestigious group of fellow athletes – the Save the Dream Ambassadors truly are a collection of sporting icons and I am honoured to be working among them. Together we can help protect children from some of the challenges sport presents by encouraging young people and those that guide them to follow the key values and positive attitudes of sport such as respect, integrity and team work. 

Save the Dream is a global initiative that works with youth, and for youth, towards a sport free from corruption, violence and discrimination. The Ambassador programme is led by Italian football icon Alessandro Del Piero and features several other high-profile professional athletes from different sports and regions around the world.

Massimiliano Montanari, Executive Director of Save the Dream, said:

”Both athletes represent the spirit and values of Save the Dream and will be an incredible asset to our team of Ambassadors. Throughout their amazing careers they have shown passion, determination and sportsmanship, inspiring generations of young fans and athletes, and they continue to set an example through their coaching and administrative roles.

”We are delighted to welcome Fernando Hierro and Fernando Sanz to the team and are looking forward to working with them to promote the power of fair play as a unifying force, as we continue our mission to transform our world through the true spirit of sport.