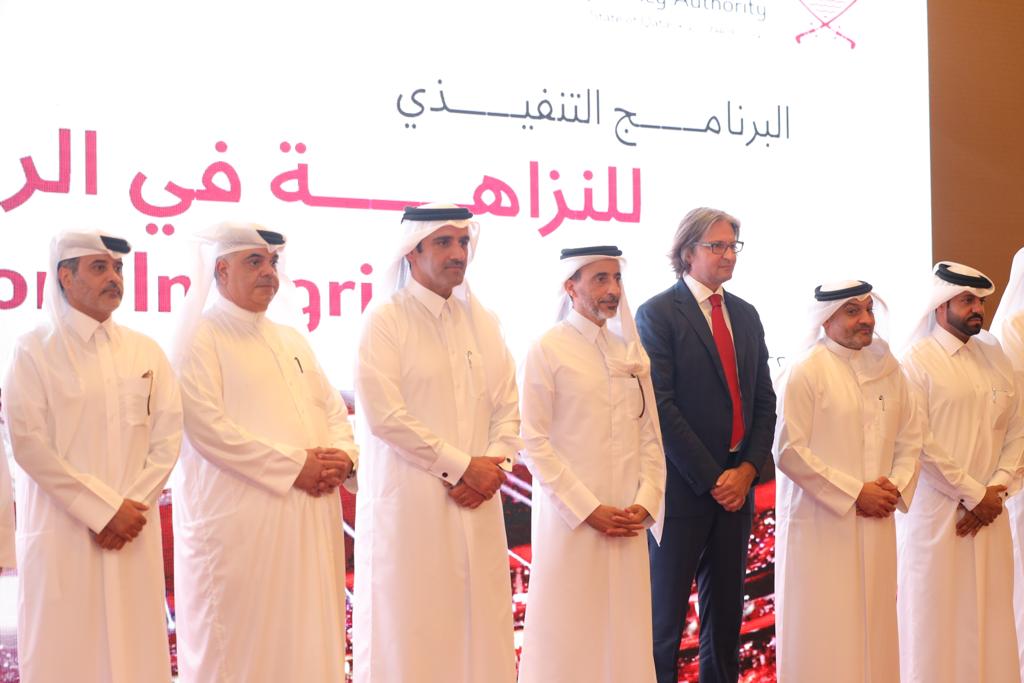 The Administrative Control and Transparency Authority, in cooperation with the International Center for Sports Security (ICSS), organized the “Executive Program for Integrity in Sports” during the period from 2 to 6 October 2022 in alSheraton Grand Doha Resort & Convention Hotel.

The opening of the program was witnessed by HE Salah bin Ghanem Al-Ali, Minister of Sports and Youth, HE Hamad Bin Nasser Al-Misnad, Chairman of the Administrative Control and Transparency Authority, and Mr. Massimiliano Montanari, CEO of the International Center for Sports Security (ICSS).

His Excellency touched on the interest of His Highness Sheikh Tamim Bin Hamad Al Thani – Amir  of the State of Qatar – may God protect him and his patronage, to enhance transparency and integrity in all aspects of public and private work in the country, which had a clear and prominent impact in making the State of Qatar occupy the highest ranks. In the international indicators of transparency, integrity and anti-corruption, the State of Qatar becomes a unique experience, which many countries seek to draw upon and benefit from.

Addressing the audience, His Excellency the Chairman of the Administrative Control and Transparency Authority said: We welcome you at the time that separates us and the whole world for forty-nine days since the State of Qatar hosts the global event, the FIFA World Cup Qatar 2022, stressing that sport plays a major role in Qatar National Vision 2030, as The State of Qatar aspires to occupy a world leading position in the field of sports, and to bring the world together through sustainable sports development, taking advantage of the achievements made by the State of Qatar so far.

He added: It is not a secret to everyone that the State of Qatar’s hosting of the most important sporting event at the global level, “the FIFA World Cup Qatar 2022”, is as much a pride for our country as it dazzles the world with the good organization and optimal hosting of the guests of the State of Qatar, according to what has been accomplished from high-level World Cup stadiums. And advanced infrastructure, and modern logistical and security arrangements, to the extent that organizing this world championship puts us in front of challenges that we all have to face with a high spirit of national responsibility, especially promoting integrity and transparency in the field of sports.

His Excellency explained that there is widespread recognition of the negative economic and societal consequences of corruption in sports, especially its impact on youth, so efforts must be increased to understand the size, scope and manifestations of corruption in sports around the world, indicating that the international community is fully aware of the need to bridge this gap. cognitive. Accordingly, the Conference of the States Parties to the United Nations Convention against Corruption, at its eighth session, adopted a special resolution on the protection of sport from corruption. The importance of protecting sport was also emphasized during the Political Declaration, which was adopted at the thirty-second special session of the United Nations General Assembly. of corruption and the strengthening of international efforts in this regard.

In the keynote speech delivered on behalf of Mr. Mohammed Hanzab, Founder and Chairman of the International Centre for Sport Security (ICSS), Mr. Massimiliano Montanari, CEO of the International Center for Sports Security (ICSS), said, When the Administrative Control and Transparency Authority and ICSS signed a memorandum of cooperation several months ago, the common promise was that the terms of this memorandum would be transformed into concrete operational work that achieves the set goals and results, and we are proud to see the first implementation of the agreement on the ground.”

The CEO of the International Center for Sports Security expressed his thanks and appreciation to the Ministry of Sports and Youth, which adopted the common vision and provided all possible assistance to the executive program that entered into force, saying: We at the International Center for Sports Security, the international organization that aims to protect global sports, feel proud to participate in this important training program, including enthusiastic trainees, participants and specialists with experience and competence, we are also proud of the participation of representatives of some UN organizations, partners and institutions.”

He added: “In this context, we cannot but highly appreciate the efforts made by the Administrative Control and Transparency Authority headed by His Excellency brother Hamad Bin Nasser Al-Misnad, and the work team in the Authority, and we take the opportunity to reaffirm our keenness to harness all the capabilities of the International Center for Sports Security to serve the Authority’s strategy and noble goals. To establish standards of integrity in sport.”

The program, held by the Administrative Control and Transparency Authority in cooperation with the International Center for Sports Security, focuses on providing knowledge of the different types of threats to sports integrity with a focus on sports corruption, in addition to developing an understanding of how national public authorities and international bodies deal with integrity violations in the field of sports. As well as developing knowledge of good practices and advanced standards in addressing different types of integrity violations, as well as developing knowledge and competencies in the field of information exchange and exposing the risks of sports corruption, as well as identifying potential actions to address integrity violations and adding value to the work of other stakeholders within the sports system.