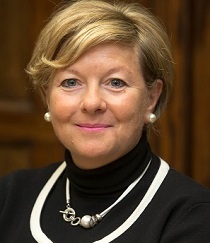 Karen Webb Moss, Board Member of the International Centre for Sport Security (ICSS), has been appointed the new Chair of British Swimming to become the first woman to hold the position on a permanent basis.

Karen takes over from Interim Chair Adele Stach-Kevitz, who has been in post since the sad passing of previous Chair Maurice Watkins and who will now take up the post of Senior Non-Executive Director on the Board.

Less than two years out from the Olympic and Paralympic Games of Paris 2024, Webb-Moss – the first woman to be permanent Chair of British Swimming – will be responsible for leading the British Swimming Board and its focus on organisational strategy and development, as well as ensuring the best high-performance environment and resources are available to athletes, coaches and staff across the aquatic disciplines for optimum performance and culture.

A respected senior sport executive and board-level leader, Webb-Moss has amassed a wide range of expertise across a number of diverse and high-profile fields, primarily in sport and major events, having advised international governments, host cities, the Olympic and Paralympic movement, organising committees, national governing bodies, broadcasters and sponsors during her career.

Karen was the Executive Director for Marketing and Communications for the Olympic Park Legacy Company in the lead-up to London 2012. During this time, she was also a member of the UK Sport Major Events panel, leading on from her time as Head of Media and Marketing Communications for the Sydney 2000 Olympic and Paralympic Games Organising Committee.

Over the past few years, Karen has been based overseas working with the leadership of the FIFA World Cup Qatar 2022 and prior to this was COO of the International Centre of Sport Security, where she remains a Board Director. She returned to the UK at the beginning of this year to establish her own sports business, working most recently with Birmingham’s 2022 Commonwealth Games Organising Committee.