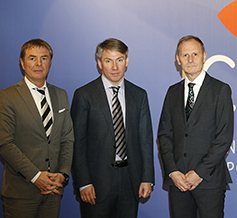 With the growth of domestic football in Russia and preparations to host several high-profile international sport events well underway, the International Centre for Sport Security (ICSS) this week delivered their first safety and security workshop with the Russian Football Premier League (RFPL) in Moscow.

As part of their commitment to safeguard sport, ICSS experts including Helmut Spahn (Director General, ICSS) and Malcolm Tarbitt, (Executive Director – Safety and Security, ICSS), as well as Birger Nass (Head of Stadium Infrastructure & Security, Deutsche FuÃŸball Liga), joined over 80 representatives from RFPL members to help enhance understanding and share some of the latest trends in sport safety and security.

Under the theme of ‘Stadium Security in light of 2018 World Cup preparation: Russian and International practices’, a range of stakeholders from Russian football attended the workshop including clubs, stadium directors, security officers, players unions, representatives of the 2018 FIFA World Cup Local Organising Committee – including Alexey Sorokin (CEO, 2018 FIFA World Cup Russia™ Local Organising Committee) – and the Ministry of Sport of the Russian Federation.

Topics that were discussed throughout the day included security operations, infrastructure and security design, fan management as well as legal, governance and regulatory matters.

”On behalf of the Sports Ministry of the Russian Federation and in my personal capacity I am pleased to welcome all participants, organizers and guests of the International Conference – Stadium Security in light of 2018 World Cup preparation: Russian and International Practices.

”In the nearest future an unforgettable festival is waiting for us – 2018 FIFA World Cup. The best teams and their most committed supporters will come to Russia. This is a real global scale event, and there is a good reason that audiences of the latest tournaments corresponded to more than one billion people.

”The preparation for the 2018 FIFA World Cup is well under way. One of the most important aspects of successful hosting the tournament is safety and security of the participants and guests of our country.

”I am sure that by our joint efforts and taking into consideration the best international practices we shall host one of the most spectacular and entertaining World Cup in the history of World Football.

”I wish successful and effective work to all participants of the Conference!

”This workshop provided an excellent opportunity to meet and share our insight with the RFPL, as well as other key stakeholders in Russian football. On behalf of the ICSS, I would like to thank them for welcoming us here today.

”With the continued growth of the RFPL, new stadia being developed and the country preparing to host many high-profile international events over the next few years, including the 2017 FIFA Confederations Cup™ and 2018 FIFA World Cup™, forums like this provide an important platform to share knowledge and develop a strong understanding about the main challenges and trends that now face major event organisers.

”At the ICSS, we believe that governments and governing bodies must take a lead and be at the forefront of the fight to protect sport and I would encourage other organisations to show same leadership in confronting the many new threats that now face sport.