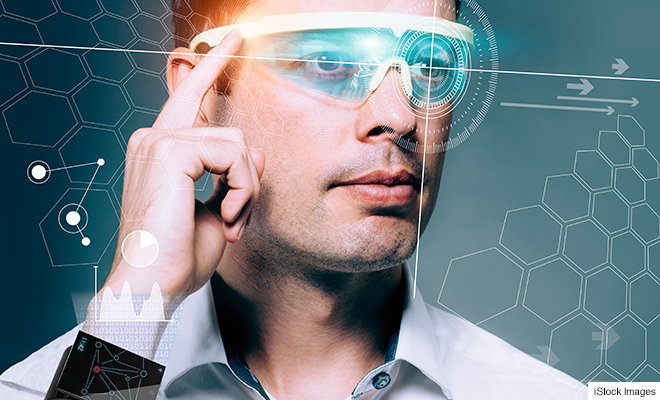 Tracey Caldwell examines how wearable technology is being used across the sport sector,

from supporting security to monitoring athletes and enhancing spectators’ experiences,

exploring the direct and indirect impacts, as well as the issues that will confront security

managers as these technologies proliferate

This year looks set to be the year of wearable technology – and the signs are that sports events will be among the early adopters, particularly in order to support safety and security.

Wearable technology already developed for staff to use on the frontline includes bodyworn cameras, smartglasses and body sensors, which are built into belts, vests or other gear. In December 2014, analyst company Forrester Research released a report stating that wearable technology will take off as “brands, retailers, sports stadiums, healthcare companies, and others develop new business models to take advantage of wearables”. It expects to see wearables that monitor the safety of field workers, location-aware smartwatches helping managers assign staff in real time and video and photo devices that augment the insights of security staff. “Wearable technology is at the point now where it is reasonable for a wearable environment to occur cost effectively and with the right accuracy and capability,” says Paul Steinberg, Chief Technology Officer at Motorola Solutions, which is increasingly focused on wearables. He adds, “right now it is law enforcement and police [who are using wearable tech], but it is not a difficult stretch to see how this would be leveraged in other areas, including stadium security, where there are lots of potential wearables and lots of appropriate ways to communicate with them. We are increasingly going to see the ability for stadium security to communicate with their staff in a more flexible way than only spoken word and handheld audio – a headworn display would be a very logical thing, the ability to collect their location precisely and accurately would be very useful at a stadium.”

Wearables have two basic purposes, according to Steinberg. One is to collect data, such as biometrics, the status of a police officer or firefighter’s weaponry, or about the surrounding environment.

The other purpose is to convey information to the wearer – which could be through a variety of user interfaces, from vibration-based, to a headworn display or via an earpiece. Steinberg says: “We are a little way from this, but it is certainly going to happen – a person can be walking and capturing video images and be communicating in real time to the location that can be processing the imagery and doing facial recognition or looking for patterns in crowd behaviours. Again, the security personnel can be essentially collecting data while analytics calculate what is going on.” Wearables have a key part to play in preventing incidents that can compromise safety and security. David Boswell, Director of Definitive Event Policing (DEP), explains “wearables are hugely important for the safety of our officers at DEP and for keeping the public safe at festivals, outdoor events and sporting events, too. Bodycams are an excellent example. By recording an incident as and when it happens, we can protect officers from false allegations made against them when dealing with a difficult situation. It acts as a deterrent and has a positive impact on general public safety.” He adds, “our experience is that wearing a bodycam can in itself help an incident from escalating in the first place. People are very aware they are being recorded. The camera is very visible and not hidden in any way, and people often adjust their behaviour in response. It is commonly known that people who may be intent on causing disruption are likely to behave differently if they are aware that their behaviour and actions are being recorded.” They will know the likelihood of their identity being discovered, and of a successful prosecution, would be higher than if security or law enforcement personnel did not use such equipment, adds Boswell. “It’s a very important tool.” Stadia are usually monitored with fixed cameras, relaying video data to a control room, while security guards use radios, or similar items, to communicate. However, bodyworn cameras are increasingly offering an incremental layer of security. In anticipation of the 2014 World Cup, South Africa-based Betatrac Telematic Solutions conducted a trial with a private security firm and the Brazilian police of its jacket-based cameras. Betatrac’s products include a lightweight jacket that has real-time geo-visual technologies, with GPS tracking, a camera for still images and video, and audio recording, which can be controlled automatically or on demand.